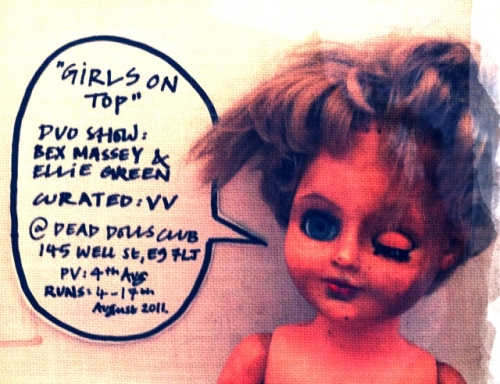 VV Collective | Duo Exhibition | ‘Girls on Top’ Private ViewOn the 4th August 2011 Bex Massey and Ellie Green invite you to the Dead Dolls club, an exciting new venue on Well’s street for the opening of their duo show- Girls on Top. Both artists will be creating a new body of work for the exhibition.

Some are born great, some achieve greatness and some have greatness thrust upon them”. – Act II, Scene V, Twelfth Night, Shakespeare

Bex Massey
Massey continues to question ‘the way in which women are represented in the Media’. In this series however she adopts a much less sympathetic stance and instead explores ‘Greed’ and it’s pivotal role in tarnishing their celebrity.
Her satirical take on a certain celebrity very close to her regional roots has spawned a graphic novel and the narrative for large scale drawings and paintings. All of which further illustrate the destructive impact that this tabloid icon has had on other female celebrities, her local area and woman kind in general.
www.bexmassey.com

Eleanor Green
A series aimed at questioning artists own recognition of their talents; what an artist looks like and the way in which they perceive themselves, Green approaches celebrity, fame and success from the position of the ‘every (wo)man’.
Green creates her own celebrity circle-in which she likens her creative friends to those of male notoriety. She utilises iconic stills to demonstrate the parallels between their practice and persona. In so doing Green elevates her peers to the fame she thinks they deserve, but as women they are less likely to receive.
www.eleanorgreen.com