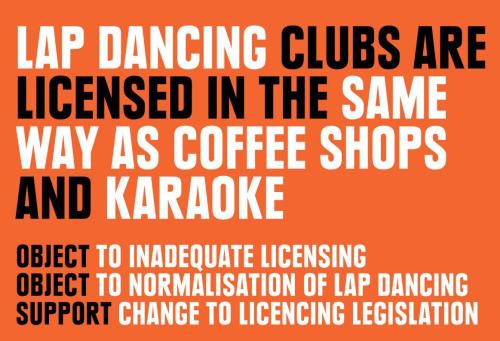 OBJECT are organising a campaign for a nil limit of lapdancing in Tower Hamlets. There is a rally this Thursday 6pm-8pm at the London Muslim Centre, and also a consultation linked below that you can respond to. You DON’T need to be a resident of Tower Hamlets to respond.

OBJECT is lobbying in partnership with the Fawcett Society to change licensing laws for lap dancing clubs. The “Stripping the Illusion” campaign is supported by a broad cross-party coalition of MPs, Peers, councillors, local authorities.

It is also supported by innumerable women’s organisations, resident’s associations and academics. Perhaps most significantly it is supported by a considerable number of women who have exited the lap dancing industry, whose input into this campaign has been invaluable.

Find out more about “Stripping the Illusion” campaign and how you can lobby your council to license lap dancing clubs as sex establishments not leisure venues on the OBJECT website.
http://www.object.org.uk/beinvolved

This entry was posted in activism, Feminism. Bookmark the permalink.