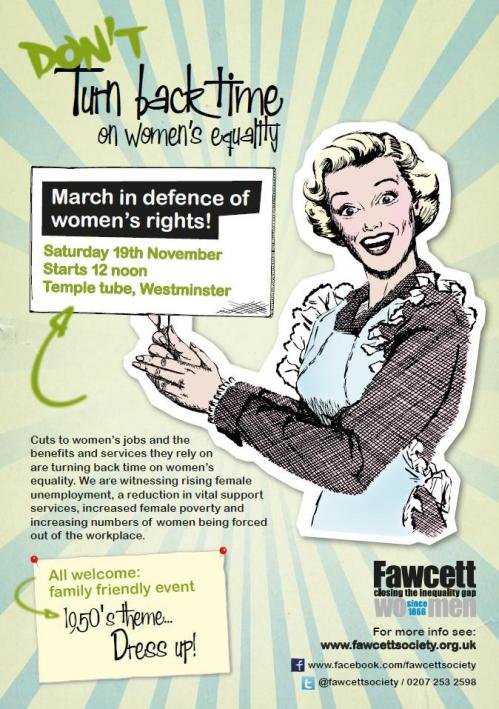 On average, women earn less, own less, and are more likely to work and retire in poverty than men.

The government’s approach to cutting the deficit will widen the gap between women and men:

THE ‘DON’T TURN BACK TIME MARCH’ IN LONDON

1950’s THEME: DRESS UP! To send the message that women don’t want to be catapulted back to the levels of inequality of yesteryear.
Your costume can be as simple (maybe just a head scarf) or as complicated (think full 50’s get-up complete with rubber gloves and chains to chain yourself to the kitchen sink with!) as you like.
FAMILY FRIENDLY – STAR SPEAKERS TO BE CONFIRMED
‘ATTEND’ the event on Facebook(http://tinyurl.com/62ewtuu)
Spread the word on Twitter using hashtag #dontturnbacktime, and better still,
INVITE ALL YOUR FRIENDS!
March Details:

12.30 – march sets off down Embankment, across Horse Guards Avenue, down Whitehall past Downing Street.
13.30 – march finishes with a rally on King Charles Street.

Download our march poster, print if off and stick it up everywhere!

Check back here or sign up for our free e-bulletin to receive up-to-date information on the latest speakers confirmed for the rally.

For those of you who aren’t able to attend the march in London, or would rather hold your own mini-action, you can host a ‘DON’T turn back time tea party’ to raise awareness and generate media coverage of the issues in your local area!

Download our template invitations and ‘Tea Party campaign pack’ for information on how to go about organising your party and on how to generate media coverage.

Don’t forget to tell us what you are planning!
For further information see document downloads to the left, or email economy@fawcettsociety.org.uk to get involved.