With the news that Nadezhda Tolokonnikova, Maria Alyokhina and Yekaterina Samutsevich of the Russian punk collective, Pussy Riot, were sentenced to two years in prison for a wholly necessary and valid political protest, contemporary poets in London will come together in a unique evening of readings, featuring original poetry and text, as well as the words of Pussy Riot themselves. This event is an act of solidarity through the medium of poetry – a celebration of the courage and spirit of fellow writers of this generation, writing for real political change in a country that needs it. 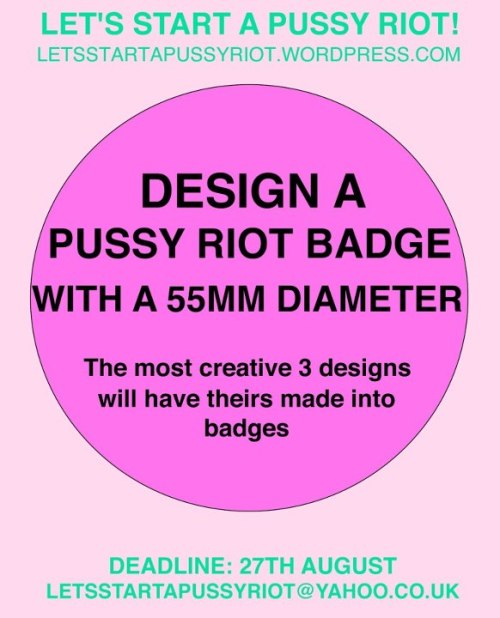 Let’s Start A Pussy Riot! – Please submit your own creative responses via tumblr, our blog or email letsstartapussyriot@yahoo.co.uk! 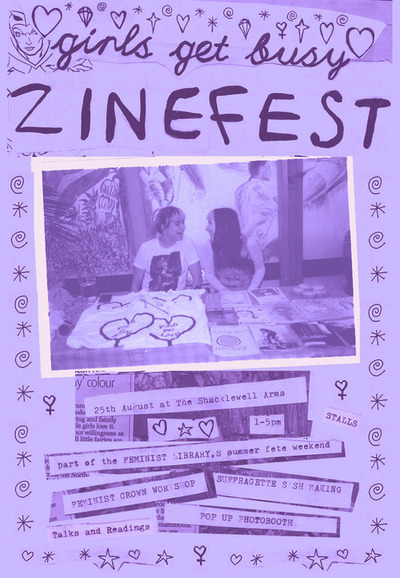 ♡ TALKS ♡
The Feminist Library – http://feministlibrary.co.uk/
Wears The Trousers – http://wearsthetrousers.com/
Not So Popular

LOTS MORE TO BE CONFIRMED!

Sunday the 26th of August – SUMMER FÊTE IN THE LIBRARY

OPEN TO ALL – NOON UNTIL LATE

* Kids’ Space with Activities and face-painting

– Free Entry – Suggested Donation £4 –
Donate to Save our Library

The Summer fête is for everyone – we’d love your input and help. If you’d like to have a stall, suggest an activity, run a workshop, donate a cake or come along and lend a hand, please get in touch!

Are you part of a feminist group? Feel free to bring along leaflets etc. Get in touch if you would like to talk about your group, or give a talk/lead a discussion on any topic that interests you, particularly those related to women in the arts and/or activism.

Pussy Riot: Final Verdict will take place in the Royal Court Theatre’s café bar at 11am on Friday 17 August. The event is free and non-ticketed.

The Royal Court Theatre joins a global day of protest in solidarity with Moscow’s feminist punk band Pussy Riot on Friday 17 August at 11am before the final verdict is delivered at 12pm (3pm Moscow time).

The families and defence lawyers of the three women, who have been held in custody for five months after being arrested for an impromptu anti-Putin protest in M
oscow’s main cathedral, have asked people around the world to unite on 17 August to support the cause.

In response to this, the testimonies of the three arrested members of the collective; Nadezhda Tolokonnikova, Maria Alekhina and Yekaterina Samutsevich will be brought alive by actors in a rehearsed reading in the Royal Court’s café bar. Labour MP Kerry McCarthy will reflect on her experiences of being present in the courtroom during the trial and playwright E.V Crowe will give a short introduction.

Sasha Dugdale, a writer and translator who has worked extensively with the Royal Court, has been following the live feeds from the trial and is translating their testimonies into English. She described the women’s words as ‘extraordinary, poetic, full of passion and innocence’.

“The Pussy Riot trial is of concern to those who believe that the right of artists to question the actions of the state is central to an egalitarian society. As a London home for theatre artists to ask challenging questions, the Royal Court feels like the obvious place for the women’s words to be heard in English.”
Dominic Cooke, Artistic Director of the Royal Court

“Watching their activism on youtube and hearing their courtroom statements, I felt inspired in a way no other cultural movement in my lifetime has captured my imagination or responded to my perception of women’s place in the cultural and political landscape. What Pussy Riot does is take a stand, through art, and then maximize its impact through social media. They are women who make me want to understand the world I’m living in, to write about it, and to be brave whatever the cost.”
E.V Crowe, Playwright

“The trial of these three brave young women has enormous consequences. Like no other case in recent history, it has demonstrated to a huge number of Russians and people around the world that it is possible to fight back, to stand up for justice and to be fearless in the face of cruelty and corruption.”
Sasha Dugdale, Writer

Ladies and Gentlemen, Boys and Girls!

Arrive a few mins before 2pm in front of the Southbank Centre (on the walkway close to the waterfront) then when the clock strikes 2:00pm freeze in your best Superhero pose!

The freeze will last for 5 minutes so choose your pose wisely!

After the freeze we’ll do a Superheroes March down Southbank and over Westminster Bridge. From there you can off wander into the city with your new found Superhero friends and save the day if it needs saving!

This is not a protest, the aim is to create a spectacular visual impact that intrigues the public and encourages them to learn more about Pussy Riot.

We’re looking for people to document the happening so please bring your photographer/videographer friends!

Here’s some inspiration for your homemade costumes:

Back in April Storm in a Teacup, Girls Get Busy & Not So Popular joined together to organise a fundraiser in support of PUSSY RIOT.

We have joined forces once again to create a ZINE: LET’S START A PUSSY RIOT with your creative responses to the PUSSY RIOT trial, in celebration of our Freedom of Speech! Please submit your response to letsstartapussyriot@yahoo.co.uk